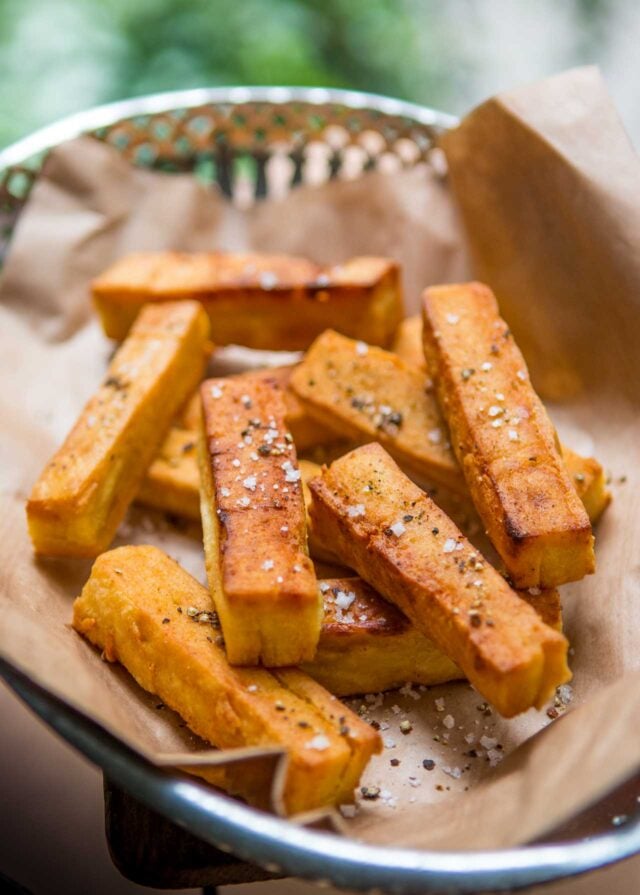 Way back in 2008, probably before some of you were born, I posted a recipe for Panisses, chickpea flour fritters. They weren’t so well known outside of the south of France, and even in Paris, people don’t really know what they are. So it was fun introducing these Mediterranean specialties to a wider audience, even if some readers were scratching their heads as to how to get the main ingredient; chickpea flour. 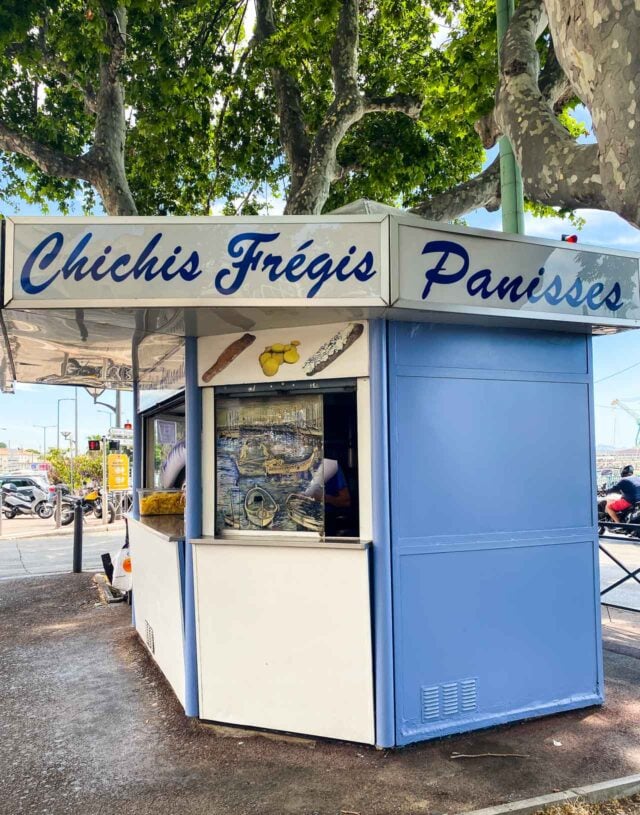 Nowadays, with gluten-free baking more popular, chickpea flour is easy to get and a recent trip to Marseille, where they’re sold at seaside stands (like the one above), prompted me to make them at home again, and update the recipe with additional tips I picked up. 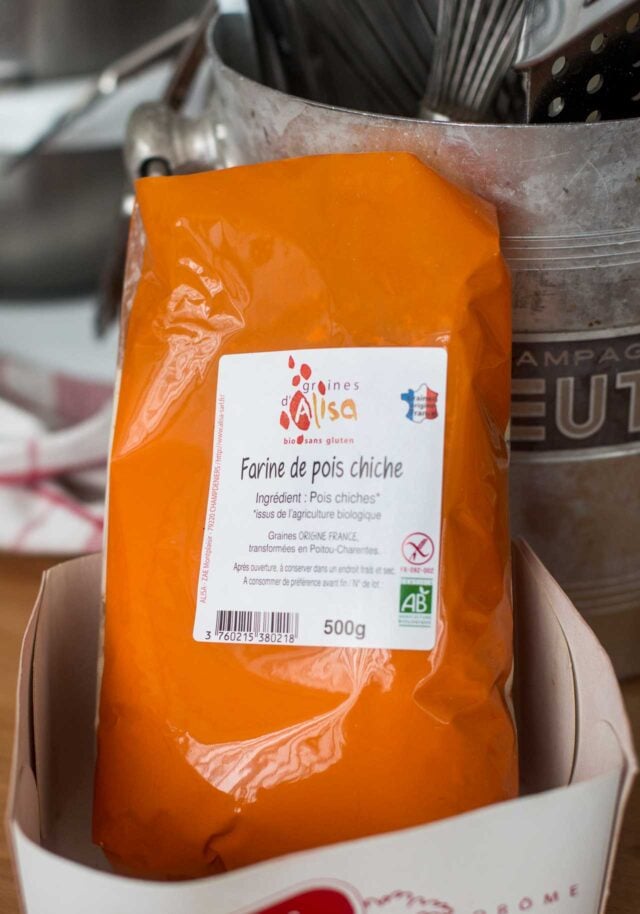 Making the batter for panisses is similar to making polenta, and just as easy. I don’t know if there is any “official” shape they’re supposed to be. In the south of France, they sometimes fashion the panisse mixture into thick logs, then slice them into rounds (or half-rounds) for frying. In Jacques Médecin’s iconic book, Cuisine Niçoise, he calls for the cook to oil a dozen small saucers and use those to mold the panisse mixture, which is later cut into baton-like shapes, which are more irregular (but kinda fun) due to the circular saucers. 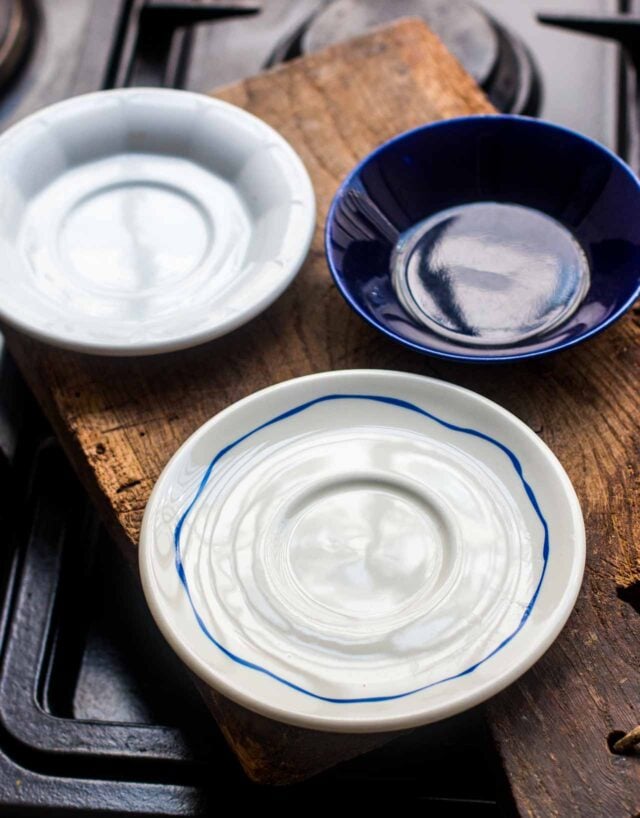 My sous-tasse (saucer) game isn’t as strong as his – I only have three, and I don’t think the dark blue one counts – so I use a 9-inch (23cm) square cake pan, which does the job nicely. If you do go to Nice or Marseille, you can still sometimes find them sold in disks with the signature circular marks of the indentations of saucers in shops, ready to fry. To be authentic, they should only be made of chickpea flour (like their cousin, socca), although I horrified a Niçoise friend when I told her one packet I saw at an épicerie (food shop) near her town listed wheat flour as an ingredient. 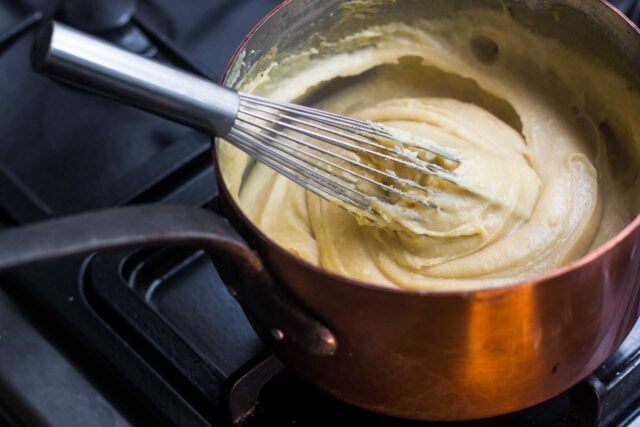 Deep-frying is generally a recipe deal-breaker for me. Any recipe that says, “Heat 4 quarts of oil in a pot…”, I turn the page or click away as fast as I can. So I prepare a nice bain of olive oil, a bath if you will, that’s deep enough to give them a nice golden exterior and keep them from sticking, and use that rather than a bottle of olive oil. It works perfectly. 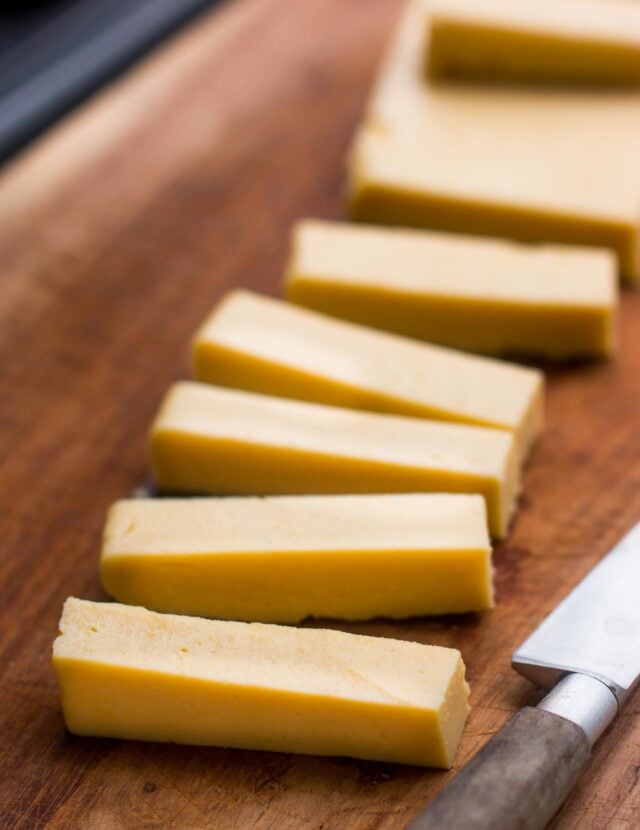 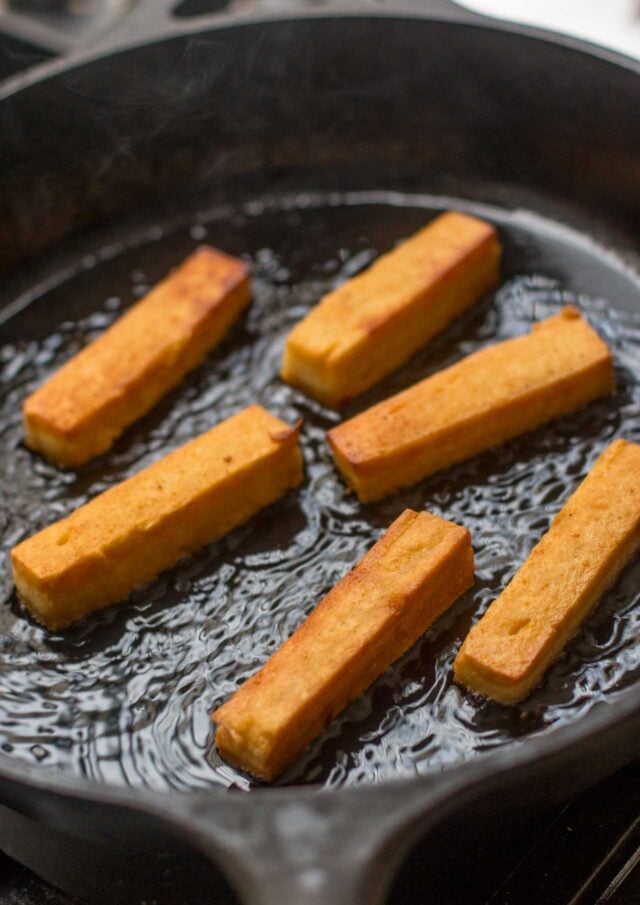 As mentioned, when I first wrote this post, chickpea flour was difficult to find and was most easily obtained by a trip to a shop that sold ingredients for Indian or Middle Eastern cooking (where it’s called gram or besan.) But some of it is quite coarse and sometimes it’s made from roasted chickpeas, neither of which you want here.

With a rise and interest in gluten-free baking, chickpea flour (also called garbanzo flour) is easy to find at natural food stores and I get mine in Paris at Biocoop or Naturalia, where it’s labeled farine de pois chiche and you can find it in Italian food shops labeled farina di ceci too. You want to use unroasted chickpea flour that’s finely milled, as shown below. You can also get it via mail order from Bob’s Red Mill and Amazon, and for DIYers, there are recipes for making it yourself. 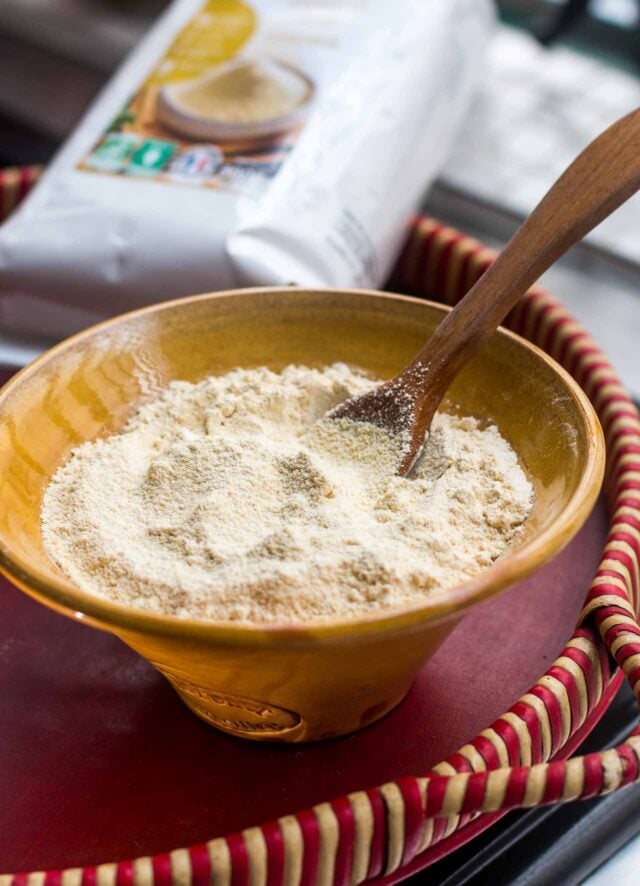 Because panisses come from the south of France, the natural accompaniment is rosé, although for those not imbibing, ice-cold lemonade works well too. Americans who come to Paris wonder where all the ice in France is, and I’m here to tell you that it’s all down in the south, where people plunk a cube or two in their rosé, but also sometimes in their white and red wine, too. Far from being très américain, café waiters often automatically bring customers a little bucket of ice with your drink, and if they don’t, they’ll do it on request. I’m writing a bit more about that in an upcoming newsletter, but my general rule of thumb is that if the wine is €10/$10 or less, you can put ice in it : ) As for panisses, I advise you to stick to the script and keep them as simple as possible, and serve them with flaky sea salt and pepper, which is the best way possible. 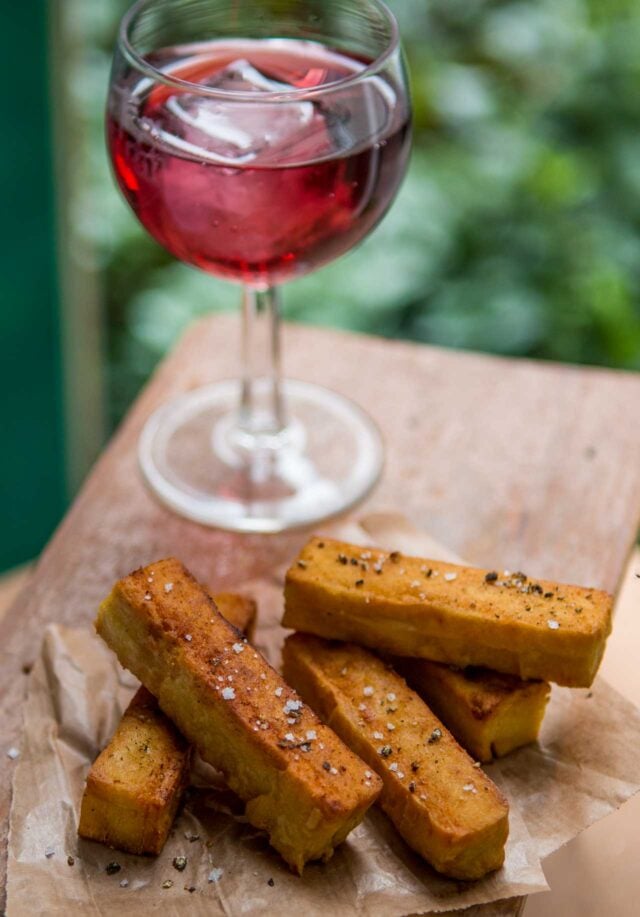 I fried my panisses in olive oil, as is traditional, in my cast iron skillet and it’s a little hard to tell you exactly how much to use but you want enough so that the panisses won’t stick. This makes about 36 panisses.

A commenter a while back noted they grilled them, which is likely possible. We can’t grill in Paris as it’s not authorized (I think it’s because they are worried about fires), but if you want to give it a go, you can likely brush them with olive oil and cook them that way. If you do, let us know how they come out in the comments.

2. Pour the chickpea flour in a medium saucepan along with the salt and olive oil. Add half of the water and stir with a sturdy whisk until the mixture is smooth. Whisk in the rest of the water.

3. Bring the mixture to a boil over high heat, stirring frequently with the whisk until it just begins to boil and thicken. Reduce the heat to low-to-medium, and continue to cook, stirring with the whisk (or a wooden spoon or spatula) until the mixture thickens and holds its shape, and pulls away from the side of the pan, about 10 minutes. It should resemble stiff, sticky mashed potatoes.

4. Immediately scrape the mixture into the oiled pan, smooth the top, and let cool. It may be difficult to get the top smooth, so do it as quickly as you can. You can use a offset spatula dipped in water to help smooth the top, and once you’ve smoothed it as best as you can, fold a kitchen towel on the counter and drop the pan a few times on the towel to help smooth it out even further. Let cool completely at room temperature.

5. To fry the panisses, unmold the solidified mixture on a cutting board and slice into three rectangles. Then use a knife to cut 3/4-inch (2cm) batons.

8. In a heavy-duty skillet, heat 1/3 to 1/2 inch (1,5 cm) of olive oil. Don’t be too parsimonious with the olive oi. When shimmering hot, fry the panisses in batches, not crowding them in the pan. Once the bottom is nicely browned and crisp on the bottom, turn with tongs, frying the panisses, turning them once each side is browned, until they’re deep golden brown on each side. They’ll take at least 5 minutes to fry them and the first batch will cook slower than subsequent batches.

8. Remove the panisses from the pan and drain on paper towels or on a brown paper bag, sprinkling them very generously with salt and pepper. Don’t be stingy with either. Continue frying the rest of the panisses, heating more oil in the pan as needed. 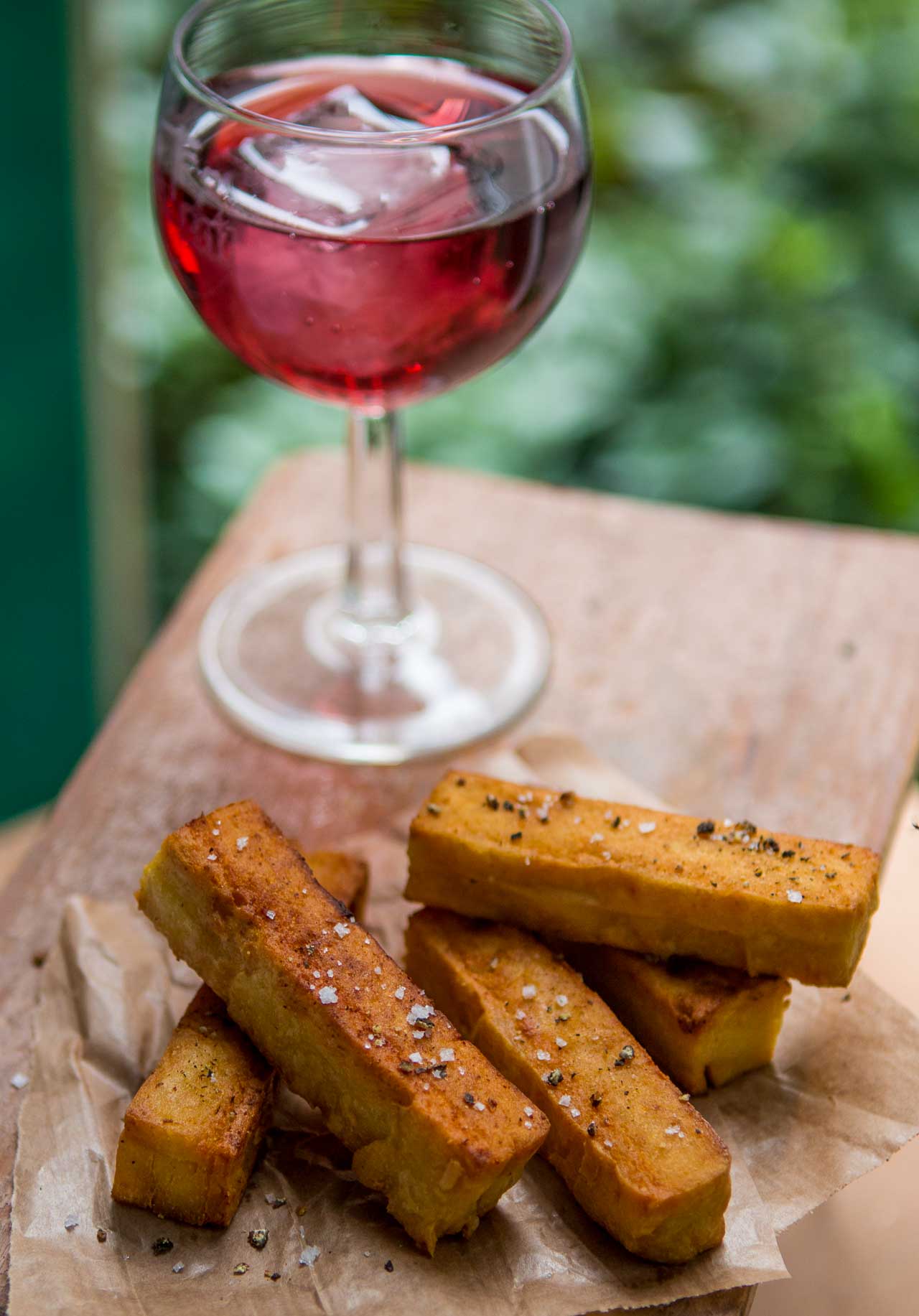